ROC for Decision Trees – where did the data come from? 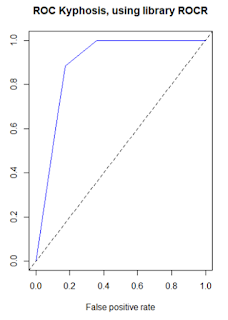 The ROC curve uses a variety of probability thresholds, reclassifies each observation, recalculates the confusion matrix, and recalculates a new value of the ordered pair (x=FPR, y=TPR) for the ROC curve.  The resulting curve shows the spread of these ordered pairs over all (including interpolated, and possibly extrapolated) probability thresholds, but the threshold values are not commonly displayed on the curve.  Plotting performance in the ROCR package does this behind the scenes, but I wanted to verify this myself.  This dataset has a small number of predictions of disease present, and at large threshold values the prediction is zero, resulting in a one column confusion matrix and zero FPR and TPR.  The following code individually applies different probability thresholds to build the ROC curve, although it does not extrapolate for large values of FPR and TPR. 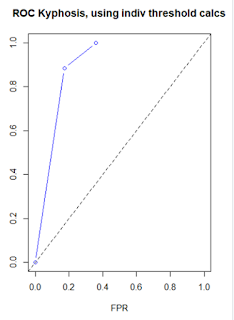 I would like to share some thoughts about outliers and domain knowledge.
One of the common steps during the data exploration stage is the search for outliers. Some analysis methods such as regression are very sensitive to outliers. As an example of sensitivity, in the following data (10,10) is an outlier. Including the outlier produces a regression line y = .26 + .91x, while excluding the outlier produces the very different regression line y = 2.

Statistics books sometimes define an outlier as being outside the range of Q1 ± 1.5*IQR or Q1 ± 3*IQR, where Q1 is the lower quartile (25th percentile value), Q3 is the upper quartile (75th percentile value), and the interquartle range IQR = Q3 – Q1.
What does one do with an outlier? It could be bad data. It is pretty unlikely that there is a graduate student who is age 9, but we don’t know whether the value should be 19 (very rare, but possible), or 29 (likely), or 39 or more (not so rare). If we have the opportunity to ask the owner of the data, perhaps we can get the value corrected. More likely is we can not ask the owner. We can delete the entire observation, or we can pretend to correct the value with a mode or median value or a judgmental value. 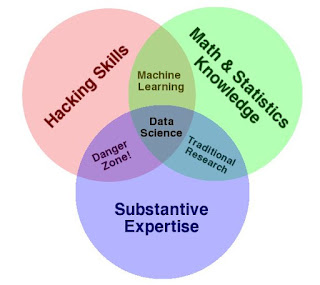 Perhaps the outlier is not bad data but rather just an unusual value. In a portfolio of property or liability insurance claims, the distribution is often positively skewed (mean greater than mode, a long tail to the positive side of the mode). Most claims are small, but occasionally there is that one enormous claim. What does one do with that outlier value? Some authors consider data science to be the Venn diagram intersection among math/statistics, computer science, and domain knowledge (see for example Drew Conway, above, in )http://drewconway.com/zia/2013/3/26/the-data-science-venn-diagram. If the data scientist is not the domain expert, he or she should consult with one. With insurance claims there are several possibilities. One is that the enormous claim is one that is unlikely to reoccur for any number of reasons. Hopefully there will never be another September 11 type destruction of two World Trade Center buildings owned by a single owner. Another example is when the insurance policy terms are revised to literally prohibit a specific kind of claim in the future. Another possibility is that the specific claim is unlikely to reoccur (the insurance company stopped insuring wheelchairs, so there won’t be another wheelchair claim), but that claim is representative of another kind of claim that is likely to occur. In this case, the outlier should not be deleted. One author has said it takes Solomon-like wisdom to discern which possibility to believe.
An interesting example of outliers occurs with sports data. For many reasons, US major league baseball player statistics have changed over the years. There are more great home run seasons nowadays than decades ago, but there are fewer great batting average seasons. Baseball fanatics know the last .400 hitter (40% ratio of hits divided by at bats over the entire season) was Ted Williams in 1941. If we have 80 years of baseball data and we are predicting the probability of another .400 hitter, we would predict close to zero. It’s possible, but extremely unlikely, right? Actually no. Assuming there will still be a shortened season in 2020, a decision that may change, this author is willing to forecast that there will be a .400 hitter in a shortened season. This is due to the theory that batters need less time in spring training practice to be at full ability than pitchers, and it is easier to achieve .400 in a small number of at bats earlier in the season when the pitchers are not at full ability. This is another example of domain expertise as a lifetime baseball fan.

“Those who can, do; those who can’t – use computer simulation.” This quote was inspired by playwright George Bernard Shaw. Computer simulation is a powerful tool that attempts to reproduce the behavior of some real-world system by sampling from one or more probability distributions. It can help explain and illustrate difficult concepts such as the Monty Hall game show problem. It can also solve problems that are hard or impossible to solve directly.

A real-world use of this type of simulation is in modeling loss events of a business entity such as a bank or insurance company. The entity will have some random number of events n per year of random sizes that is modeled by a frequency distribution f such as Poisson or negative binomial. A number n is randomly selected from the frequency distribution. Then n random numbers are randomly selected from a severity distribution g such as lognormal or gamma to simulate the sizes of the n loss events. The n loss amounts are added to produce a total value of losses for one year. The process is repeated some large number of times, say 10,000, and the 10,000 numbers are ranked. If the entity is interested in the 99.9th percentile such loss, that value is the 9,990th largest value.

It is helpful to plot the resulting histogram of the 10,000 simulations. The real-world purpose of the exercise may be to identify the 99.9th percentile value. The R quantile function quantile(x, probs) returns the percentile value equal to probs. To display the percentile value on a plot, use the text and arrow functions. R has a text function that adds text a plot, text(x, y, label), which adds a label at coordinate (x,y). Further, R has an arrows function, arrows(x0, y0, x1, y1, code=2), which draws an arrow from (x0, y0) to (x1, y1) with code 2 drawing the arrowhead at (x1, y1).

The following is the R code and resulting histogram plot of a negative binomial frequency and lognormal severity simulation. The user input values are based on the mean and standard deviation values of a dataset. 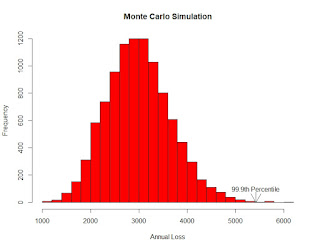 Many of my friends know I am color-challenged. Not colorblind; I see some colors, just not as many as most people see. I don't recall always being this way. In my earliest elementary school years I had a box of 8 Crayola crayons, and I did just fine. My problems began when Crayola started adding more and more colors including combinations like green yellow and yellow green. With nothing better to do, I just wrote a little program in R, and here are the original eight colors, which I still identify just fine. There is no meaning to the heights of the bars. 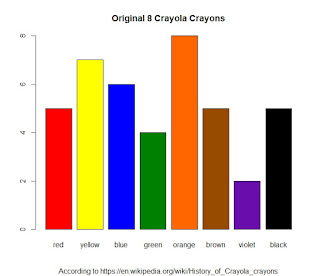 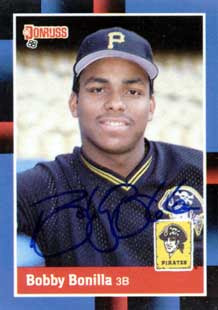 Every July 1 there will be something in the news on the New York Mets paying retired baseball player Bobby Bonilla $1.9 million per year, even though he last played for the Mets in 1999.

The Mets released him in 1999, but they still owed him $5.9 million in 2000 for the last year of a 5-year contract. The Mets and his agent negotiated a deal where the Mets would pay him 25 deferred payments of $1,193,248 per year starting in 2011 and ending in 2035. This was calculated at an 8% interest rate. The Mets were willing to do this because they thought they were earning 12% to 15% on investments with Bernie Madoff which turned out to be fictional.

These formulas appear in many math and finance textbooks under the subject of math and finance. Accountants were no doubt involved in the negotiations. I just want to suggest that math and accounting are sometimes in the news. 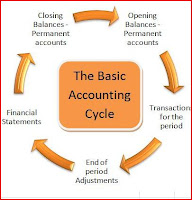 A high school Social Studies teacher may have a degree in History, but may be called upon to teach Economics, Business Law, Personal Finance, Sociology, Psychology, Criminal Science, or whatever subjects fall under Social Science, despite having little or zero background in that subject. We just assume the teacher will learn what he or she needs.

A high school or college Math teacher may have a degree in Math, but that doesn't mean he or she has taken every possible Math course. College Geometry? Finite Math? Statistics? Cryptography? A Math teacher may be called upon to teach one of these, despite having little or zero background in that subject. We just assume the teacher will learn what he or she needs.

So when a small college puts Accounting in its Math department, and decides that Accounting will fulfill a student's Math requirement, is it so surprising that the college will ask a Math teacher to teach Accounting? They did, and I am.

I did take a semester of college Accounting, decades ago. I have worked in my non-academic career with accountants. And trust me, Accounting 1 is not rocket science. So I am teaching Accounting.

The part that bothers me is that unlike the claim I make when I teach Math, I do not have a passion for Accounting.

Any comments? Would you agree to teach Accounting?

Email ThisBlogThis!Share to TwitterShare to FacebookShare to Pinterest
Labels: accounting

Math is hard.  Although so is putting on eyeliner - not that I've done a lot of that. 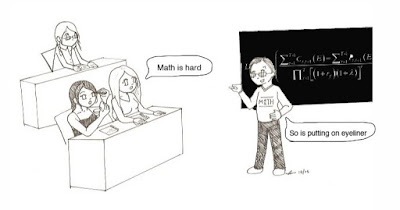 Hi.  Something not discussed in my various teacher trainings is normalizing the difficulty of an exam.  In teaching a course for the first time, I borrow another teacher's exams, and then I try to create mine that seem about equal in difficulty.  But how difficult is my exam, and is it the appropriate level of difficulty?  For a gen ed community college math course, I sort of think the very best student should get close to 100, and the class average ought to be about 75.  Of course this assumes students attend nearly every class, pay attention in class, take notes in class, do the assigned homework, etc.; assumptions that have not been exactly true in my classes.  Maybe this also assumes I am a decent teacher.  I have been curving my exams about 15 points to account for the fact that maybe my exams were too hard, and I was perhaps not the most effective teacher. Hopefully I will improve my exam creation with experience and curve less in the future.