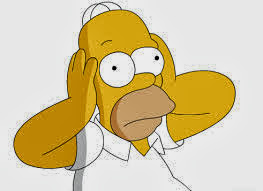 Simpsons fans know that Lisa seems to know a lot of math for someone her age but Homer can also surprise us, and higher math often sneaks its way into the show. Two university professors give some references to some of the math that has been used on the show in their site Simpsonsmath.com, and they also link to another of their pages on the quite significant mathematical backgrounds of the Simpsons' writers.

I recently learned from another article that discusses math on the Simpsons that the writers once sneaked into an episode a counterexample to Fermat's Last Theorem. This theorem is a famous problem in the history of mathematics and states that no three positive integers a, b, and c can satisfy the equation an + bn = cn for any integer value of n > 2. The theorem was conjectured in 1637 and not proven until 1995, yet Homer writes on a blackboard a counterexample 398712 + 436512 = 447212.